Susan Fleming And Her Moose Fixation 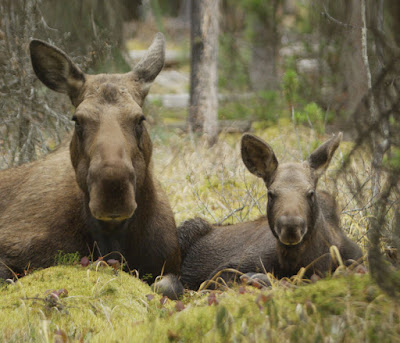 "Next I'll be doing a film about moose."
Respected filmmaker Susan Fleming told me this startling news more than two years ago and I kept wondering what had happened to her latest project.
You can check it out for yourself when Moose: A Year In The Life Of A Twig Eater debuts on CBC-TV's The Nature Of Things on Thursday October 15 at 8 p.m.
"It certainly was the most arduous," Fleming reports back to me. "We were unbelievably lucky in getting practically everything we wanted."
You may not know Fleming's name but if you're a fan of NOT then you've seen her take on crows (2010's A Murder Of Crows), raccoons ( 2012's Raccoon Nation) and coyotes and wolves (2014's Meet The Coywolf).
"Moose are the hardest to photography because of their size," she says with a laugh. " You don't want an angry moose charging you at anytime."
"Their habitat are heavily wooded and hilly terrain. They have a temper if provoked. There's no place to run to --the calves are faster than humans at just a few weeks."
Fleming's idea was to follow several mothers and newborn calves in the Maligne Valley of Jasper National Park along with her director of photography Hugo Kitching.
"First, we had to keep in touch with these particular mothers. We'd get up at 4 a.m. in the town and tramp up the mountains day after day.
"We were lucky the area has relatively few moose --so we hoped we wouldn't lose them completely.
But we could go for days, wondering if we had lost them."
At one point Kitching in the deep winter snows trudges up steep  hills to find one of them --and what he finds is heartbreaking.
Fleming reports she got scenes which continue to astonish her.
"We see one mother showing her calf how to eat the underwater plants so essential in the moose diet. It sums up their whole life system."
Saddest scene has the mother the next spring chasing off her charge --he is now old enough to look after himself and she is  anticipating a new calf soon.

In another incredible scene a calf wanders right up to a snorting bull moose who is in rut.
"If the calf had been a female the bull might have tried to mount her and would have killed her. Here curiosity takes over and he follows the calf for a bit."
A shot like this could never have been preplanned.
As Fleming investigated the subject she discovered moose populations are on the wane over many North American provinces and states.
"In Wisconsin numbers are down by as much as 60 per cent."
Fleming says global warming is the chief villain --water borne tics which get attached to the animals normally died off in the tough winters. Mild winters mean these parasites grow inside the ears and even penetrate the brain  and bring down increasingly large numbers.
What Fleming remembers about the shoot? "The constant hikking which was back breaking as we carried all that equipment. We could go for long periods without any sightings and then strike it rich."
The year in the development of the calves also comes with scenes of great tragedy --which won't be revealed here.
"We all got terribly upset. Because in the first year the calves are preyed on by wolves and bears. If they survive that year then they can thrive."
To survive Fleming must make sales to both CBC and PBS(for the series Nature) and produce different versions for these different TV markets.
This time she has also made a sale top BBC-TV and reports the British version will be considerably longer.
And her next subject? I'm pressing her.
"Still to be decided , I'll tell you later."
MOOSE: A YEAR IN THE LIFE OF A TWIG EATER DEBUTS ON CBC-TV'S THE NATURE OF THINGS THURSDAY OCTOBER 15 AT 8 P.M.
MY RATING: ****.