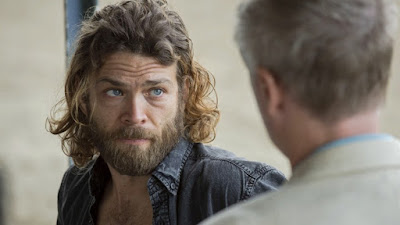 We've met before!" I warn executive producer of CBC-TV's new drama section The Romeo Section which debuts Wednesday night at 89 p.m. on CBC-TV.
And Chris Haddock sighs mightily.
He's been down this long, winding road before.

I first met Haddock in 1998 when he was creating Da Vinci's Inquest which starred Nick Campbell and ran and ran to great acclaim --CBS even bought the U.S. rights to run on its affiliates.
That spawned the sequel Da Vinci's City Hall (2005-06) and more renown.
I remember a tense interview with Haddock just before he debuted Intelligence (2006-07) on CBC.
It was completely brilliant but CBC didn't quite know how to handle it --the subject was provocative and the public broadcaster has no 10 p.m. slots left for challenging drama --The National runs at 10 p.m.
Eventually Haddock sold remake rights for a U.S. version first to CBS and then Fox but subsequent pilots were disappointing and nothing came of it.
So Haddock addled over to HBO for yet more critical acclaim on Boardwalk Empire as producer and writer.
"Now I'm back," he grins wearily.
We met up briefly at CBC's fall launch.
Because the sad fact is Canadian TV doesn't quite know how to fashion a challenging dramatic series hit.
Look, I like and appreciate the smoothness of a Rookie Blue or a Saving Hope which are shot in T.O. but can be be  neatly repackaged for U.S. TV consumption.
CBC when faced with potential greatness tends to back off.
I liked and admired David Sutcliffe in the T.O.Cracked (2013) but that series had birth pangs and went under after 1 1./2 seasons.
I frequently visited the set of CBC's This Is Wonderland (2005-06) but again producer Bernie Zuckerman and creator George F,. Walker were told they were making a 10 p.m. show and there were no 10 p.m. slots available on CBC.
But Wednesday night at 9 CBC is debuting The Romeo Section which is densely plotted made and demands the most attention from viewers.

The network is desperate for a bright new hit.
"I think it's pretty good," Haddock says with great modesty.
Shot like a movie with superb cinematography from Brendan Uegama and great production design from James Hazell and fine art direction from Racquel Roper, the series is just about the best thing to hit Canadian TV in years.
Going back to DaVinci Haddock says he always had to neatly sum up stories at the end of each episode.
"These days the pieces can float. Dramatically it makes more sense."
I've watched the first two hours and can report the acting is outstanding from the likes of  co-stars Juan Riedinger, Jemmy Chan and Andrew Airlie.

Story lines here are very complex, scenes play out at different speeds, just keeping itt all straight is a challenge. with location shooting in both Hong Kong and Vancouver.

The question is simply this: will mainstream audiences be watching or is this the kind of fare relegated to cable networks these days?
On Canadian network TV some very fine scripted Canadian shows have perished --victims of the ratings game: Don McKellar's Twitch City, Power Play, Strange Empire.
Who knows what works anymore in this fragmented TV market.
'I can only say that The Romeo Section is as fine as anything Haddock has ever made and deserves to be watched.
THE ROMEO SECTION PREMIERES ON CBC-TV ON WEDNESDAY OCTOBER 14 AT 9 P.M.
MY RATING: ****.