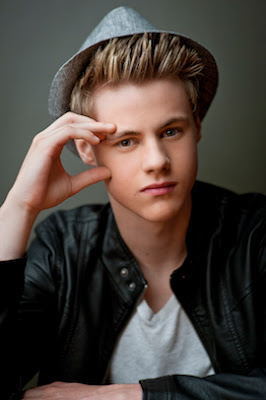 It was sheer coincidence but there I was just sitting down to watch vimeos of the new CBC-TV series When Calls The Heart and the opportunity came to interview the young co-star of the show Mitchell Kummen.
I'd been hearing about When Calls The Heart for several years --it's a Hallmark TV series shot in B.C. with a Canadian theme.
There's a stalwart Mountie played by Daniel Lissing (he's actually Australian), there's Lori Loughlin who I first met decades ago on Full House and the recreation of turn-of-the century recreation is pretty impressive.
So why has this show already been seen in the U.S. and Britain but not on Canadian TV?
When I chatted up Lissing and co-star Erin Krakow at the CBC TV launch they seemed pleasantly surprised it was finally coming to Canadian TV.
Mitchell Kummen has the choice role of Gabe Montgomery on WCTH --the third season currents airs on US and UK TV.
Which means in the scenes I've caught him in he's more than two years younger than he is today, right?
He also has a strange resume in that he's played younger versions of big stars --he was the younger Daniel Radcliffe in Horns.
And he was a young Callum Keith Rennie in the TV series Shattered.
And he played Don Cherry as a young kid in the TV movie The Don Cherry Story.
Kummen says for WCTH a cool million dollars worth of nineteenth century era sets were built and the series certainly looks handsome.
When I met up with Lissing and Krakow both they were boldly predicting future seasons of the show and CBC reports initial ratings are sturdy.
Kummen says he has no problem memorizing the dozen pages of dialogue regularly needed for a TV series --he manages to read them with his mom and is a pretty quick study.
And if his acting career isn't enough Kummen reports he just might study quantum physics at university.
I was the very first TV critic on the set of Kids Of Degrassi Street in 1979, visited that series and spinoffs every year since then and note that some of those young actors grew up to become directors and screen writers in their own right.
Kummen reminds me of the teen star Andrew Bednarski who I used to interview on the set of the hit CTV series Katts And Dog (1987-1993) --he was 12 when he started and 17 when he"retired"  from the series to attenmd Queen's University.
His parents were both high school teachers who  provided expert home study and he sailed through Cambridge University ( PhD. in archaeology) financed by his salary which his parents banked and currently is on a dig in Egypt.
Getting that first big break is very important --one must also be tough enough to withstand rejection.

Then there was the twentysomething blonde on the 1980 TV set of B.A.D. Cats who was devastated when her show folded after 10 episodes.
And that's how Michelle Pfeiffer started in the biz --and is still around 35 years later.
Kummen is smart enough to have observed the work ethics of Radtcliffe who was friendly with everyone on set but also one of the hardest workers around --that kind of attitude works wonders on a busy production.
And currently Mitchell is also filming a second series (for UPtv in the U.S.) in B.C. titled Ties That Bind with Kelli Williams cast as his police detective mom and Jonathan Scarfe as his dad.
A Canadian sale is pending.
Did he say Jonathan Scarfe?
I first interviewed Jonathan Scarfe as a shy 19-year old for the high school series Madison in 1994.
So believe me based on what I've seen so far I expect to be interviewing Mitchel Kummen for years to come.