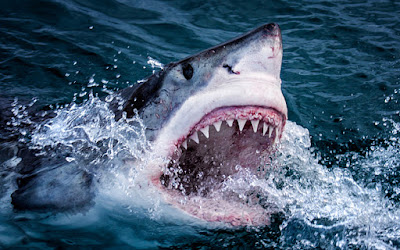 I always thought I knew quite a lot about sharks.
But it turns out after watching the first two hour long episodes of the new BBC miniseries Shark I obviously was very ill informed indeed.
To coincide with the 40th anniversary of the movie Jaws this sumptuously produced three part BBC documentary series opens up whole new worlds.
This is must see TV and in a dreary summer of never ending reruns you can catch Episode 1 and 2 Thursday July 9 starting at 8 p.m. on Discovery.one of the highlights of Shark Week.
In the first episode you'll meet the "tasselled wobbegongg" which camouflages itself in the coral reef to the extent it seems to be another pierce of coral.
It can even produce an enticing piece of "bait" that looks like a small fish --when other fish come too close it gulps them down.
Then there's the lonely Greenland shark living deep in the murky depth beneath the ice pack --it can live up to 200 years and subsists on dead polar bears and seals but is almost totally blind because of a parasite which eats out its eyes.
Then we move to Australia to meet the epaulette shark which when it finds itself high and dry on a beach calmly uses its fins as legs and walks back into the water.
Or what about the mako, a species of shark so fast it can swim with ease at 46 miles per hour to catch its prey.
Or there's the black tip who gather in great packs to round up a shoals of 10 million anchovie only to collectively gobble down their victims in one gigantic underwater massacre.
It was around then that I experienced a fright attack far more terrifying than watching the mechanical star of the movie Jaws.
The production took two solid years of filming --to photograph the elusive Greenland shark required drilling through eight feet of ice in temperatures of -20 C with the divers limited to 40 minutes in the freezing water or their oxygen supply might freeze.
Yes, there is quite a lot about the great white, the superstar of the shark world.
But here he must cede center stage to a wide variety of his kinsmen who are simply elusively wonderful.
There's the red-grilled frilled shark lurking in the shadows and looking like a cobra in  contrast to the goblin shark with its built-in sonar and an extendable mouth crammed with hundreds of teeth.
Strangest of all are the hammerheads with their eyes at the tips of their broad snouts --these ones existed even before the dinosaurs.
Discovery has 22 hours of shark programming over the week.
Starting Sunday Jul 5 at 7 p.m. Daily Planety with co-hosts Ziya Tong and Dr. Dan Riskin will have dozens of shark stories. The clip that was sent me about how sharks poop is not recommended for viewers who have not yet had their dinner.
SHARK PREMIERES ON DISCOVERY THURSDAY JULY 9 AT 8 P.M.
MY RATING: ****.