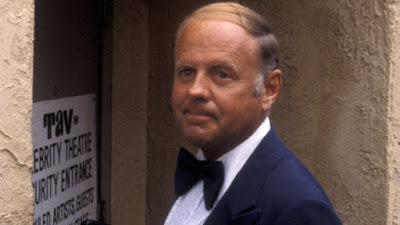 So there I was in the dentist's chair when my favorite dentist stopped buzz sawing for a minute to whisper these words:
"What was Dick Van Patten really like?"
The question is not as far fetched as one might suppose.
I found how genial the round faced actor was with several set visits to Eight Is Enough over the years (it ran 1977-81)
And there were sequels and TV movies to keep the public attention.
In addition at the 50th anniversary of ABC in 1999 I was appropriately assigned to the Eight Is Enough table where Van Patten greeted me as a long lost friend.
Van Patten died a few weeks ago, aged 86, of complications from diabetes.
That night at his table was rather bizarre: all the kids and their spouses had gathered along with Van Patten and his lovely wife.
But few had worked as actors since the show went off.
Grant Goodeve had been on an afternoon soap for awhile he told me.
Willie Aames later managed a co-starring gig in Charles At Charge.
"We got typecast," explained Lani O'Grady who sat next to me --brother Don Grady toiled on My Three Sons.
She later became a TV agent like her mom but died of a drug overdose alone in her trailer in 2001.

Most of the evening I spent chatting up Van Patten.
"My TV credits go way back," he laughed. "So far back I was the teenager Nels on I Remember Mama which ran live every Friday night on CBS (1949-1957).
"I remember one time  Judson Laire who played papa forgot he was included in the last scene and walked off the set.It was live remember so Peggy Wood as mama said her lines to an open door and a stagehand responded on the other side as papa."
I reminded Van Patten when we had first met on the set in 1977 ABC had low expectations for the show.
"Oh, it wasn't at all realistic. We were presenting an idealized view of what a modern family should look like."
Biggest hurdle happened after the first season when Diana Hyland who played mom Joan Bradford died unexpectedly.
"I went off the deep end for a bit," he said. "We all did. Then the show went back into production and eventually Betty Buckley came on board as my second wife."
Buckley has since soared into a dynamite Broadway performer in such hits as Sunset Boulevard.
Van Patten told me he remainmed interested in all the bright young performers who portrayed his kids.
Later when Adam Rich (he was the youngest kid Nicholas) got into trouble with the law he went to live with Van Patten for a bit.
"Hey, I'm his second dad""laughed Van Patten who had three sons of his own.
When I told him I'd interviewed son James Van Patten on the set of his series Three For The Road Van Patten cracked :"I hope he was polite!:"
Van Patten, of course, had a huge career outside of Eight Is Enough but said being so identified as Tom Bradford"is OK with me."