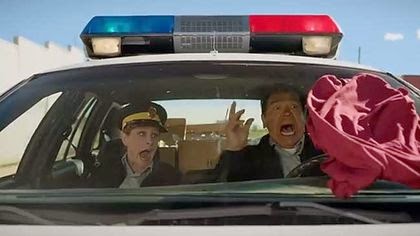 I made a silly resolution not to watch Corner Gas: The Movie because I really liked the TV series.
For a few bright seasons it seemed as f Canadian TV comedy was about to sparkle.
Then came the duds Hiccups and Dan For Mayor and Canadian TV was back again to square one.
Eventually I relented and plopped in my DVD preview and I could not stop watching.
The problem is a successful half hour TV comedy series does not easily translate into a successful 90-minute motion picture.
And I kept thinking of all those bad TV reunion shows along the way which made for gruesome viewing.
I have no idea why star Brent Butt decided to stop production after six years --I think he wanted to prove himself in other ways.
The second series he created, Hiccups, was a case of being too funny.
Co-star (and wife) Nancy Robertson was loud and great but a half hour of this every week was too much for viewers to handle.
It's like the problem I always had with Phyllis which was a spin off from Mary Tyler Moore.
Phyllis as a secondary character and as played by Cloris Leachman was a barrel of laughs but when one had to deal with her in every scene it was enough already!
Anyhow here we all are back in Dog River and if the slender plot seems a bit stretch out so what?
It seems the sleepy hamlet is facing bankruptcy "thanks" to the incompetent mayor (Cavan Cunnigham).
Brent decides to bankroll the decrepit hotel bar while Hank (Fred Ewanuick) courts a loathsome donut chain  and Wanda (Nancy Robertson) opens an illegal casino.
Hilarity ensues. For most of the time.
I once asked a CBC chief programmer why he never favored CBC TV reunions.
And he said it would only remind viewers how weak the current fare was!
But I mean a TV movie of Street Legal would certainly have made sense. Or how about one of Nick Campbell in a DaVinci TV movie get together?
In the case of Corner Gas why not follow up with a stage presentation that could tour the auditoriums of small town Canada?
And how about another Corner Gas TV get together or as soon as it can be arranged?
CORNER GAS RUNS ON THE COMEDY NETWORK MONDAY DECEMBER 22 AT 8 P.<. AND IS ALSO RUNNING ON THE MOVIE NETWORK AND CTV GO.
MY RATING: ***1/2.