Alcatraz Could Be TV's Next Big Hit 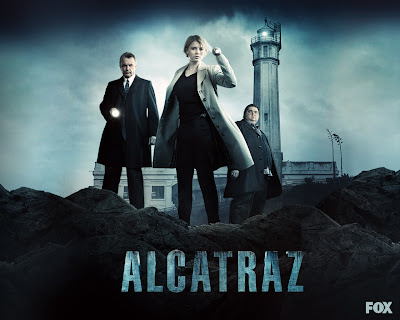 I'm ready to predict the midseason replacement series Alcatraz could be TV's next breakout hit.
I've just watched the pilot and this beautifully shot thriller has all the characteristics of a J.J. Abrams-made TV show.
The plot if fantastic to say the least.
Abrams (Fringe) would have us believe that on the day the famous prison in San Francisco's bay was officially closed (March 21, 1963) over 300 prisoners and guards simply vanished.
Just like that.
The first hour starts with two guards arriving on the rock on March 20 at midnight to find that every single person has disappeared. And as they search the catacombs something happens to them, too.
Then we flash forward to today as feisty Frisco police officer Rebecca Madsen (Sarah Joners) is jumping rooftops in hot pursuit of a baddie. He escapes --but not before she gets a good look at his peculiarly boyish face.
Later on she's investigating a murder when a mysterious FBI agent named Emerson Hauser (Sam Neill) tells her to get lost --any homicide involving an FBI officer is his territory. But he's not listed on any FBI rolls.
But Rebecca is nothing if not determined. Her uncle Ray (Robert Forster) just happens to be an ex-guard himself --which would make him much older than he looks.
And then she just happens to bump into the world's leading aiuhority on Alcatraz, a pot bellied genius with two PhDs --named Diego Soto (Jorge Garcia from Lost).
Watching the pilot proved a gripping experience. A ton of dough was plowed into the fabulously photographed chase scenes, the San Francisco location work and the unbelievably scary recreation of the Alcatraz prison (on studio sets in Vancouver),
But I'm not sure how the story line will evolve over time. It sports such an unique look it could blossom into a hit every bit as big as say Abrams's Lost which went on for seasons with few people ever understanding what was going on.
But there are also mysterious sci-fi strands to the story and the promise of unlocking a huge mystery. As in the hit Twin Peaks.
It satisfies as a detective show. But it's much more than that.
In Alcatraz it seems the guards were almost as brutish as the prisoners. The central character of the first hour, an escapee named Jack Sylvanne, is out to punish the assistant governor who tortured him and kept him confined in the hole for months on end.
Sylvanne is played by charismatic actor Jeffrey Pierce with such passion he overshadows the series regulars.
Fox is known to have had some questions about the pilot and there were industry stories the network might pass on the project.
Among the actors Neill is outstanding as the rapidly aging FBI agent. Sarah Jones doesn't seem mature enough to be a crack police officer --her character's motivations have still to be explained.
The pilot was made with great verve and there are no dull spots whatsoever.
If Alcatraz gets its opportunity to grow its audience it could become the huge dramatic show Fox desperately needs right now.
ALCATRAZ DEBUTS ON CITY-TV AND FOX ON MOND. JAN 16 AT 8 P.M.
MY RATING: *** 1/2.
Posted by james bawden at 12:05 AM