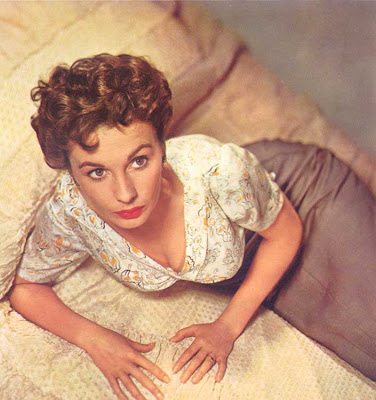 Jean Simmons who died Friday at 80 was one of Hollywood's most luminous actresses.
But in person she was shy and very reserved. I first met her on the set of The Thorn Birds in 1983 when I lunched at her table during a break in the shooting.
It was a desperately hot July afternoon out in the Simi Valley where the facade of the great house had been constructed. A lone kangaroo hopped around looking quite out of it.
I was told the poor creature was treated later that day for heat prostration.
But Simmons managed to look cool and composed as she dutifully answered a barrage of questions.
She was even more introverted when I shared another lunch with her on the set of the syndicated series Alfred Hitchcock Presents right here in Toronto in 1988.
Born in Cricklewood, north London, in 1929 she shot to stardom as the teenaged star of such fine British features as Great Expectations (1946), Black Narcissus (1947) and as Ophelia in Ham;et (1948).
About Great Expectations she remembered "I was very terrified of Martita Hunt who played Miss Havisham to the hilt. But maybe that was the way the director David Lean wanted me to feel."
But she got her revenge when she got to play Miss Havisham in the Disney TV version made in 1989.
Of Black Narcissus she said "The star was Sabu the very beautiful Indian boy. We shot every scene inside British soundstages, there isn't a shot of India in it. "
She won her first Oscar nomination for Hamlet opposite Laurence Olivier. "I feel if I had stayed in Britain I would have had a lovely career in theater but instead I went to Hollywood with my husband Stewart Granger."
Erratic Howard Hughes bought up her Rank contract and threatened to veto her career unless she cooperated with him.
"He used me in a very good picture called Angel Face that had me as a sweet killer. But he also forced me to do The Robe which was a huge hit but is a terrible picture. I got typecast in Biblical epics."
She also made The Egyptian (1954) in the same vein. "In early Cinemascope there were no close ups and the camera did not move. It was very wooden the actingn. When Michael Wilding came out with that thing on his head Peter Ustinov said he looked like a salt shaker."
Then she made the musical Guys And Dolls (1955)."When I think of Marlon Brando trying to sing I can still laugh. But I couldn't sing or dance really. Marlon and Frank Sinatra tried to outdo everyone else but the movie was a huge money maker."
Did she have a favorite film from those years? "Oh, yes, Home Before Dark (1958) which cast me as a frightened woman recovering from a complete mental breakdown."
"Another one I adored was The Grass Is Greener (1960) because I got to do comedy with Cary Grant."
And a least favorite? "The western The Big Country (1959) because director Willie Wyler picked on me during the whole shoot. He was pure evil."
In 1960 Simmons replaced another actress in Spartacus (1960) and saw it go on to become her biggest hit."Kirk Douglas liked me and we worked later on in the TV remake of Inherit The Wind."
And another 1960 hit Elmer Gantry won Oscars for both Burt Lancaster and Shirley Jones. "Burt and Kirk were both larger than life, huge male stars who liked to throw their masculinity around. So I just let them and got on with it."
When TV miniseries came along Simmons made The Thorn Birds (1983) for which she won an Emmy and North And South (1985-86).
Her best TV assignment? "The British TV movie December Flower. It was basically a two character study, shot in a seedy old home with a terrific director Stephen Fears who went on to some pretty big movies."
And what movie did she think the most neglected?
"Say Hello To Yesterday (1971) which (Canadian) director Alvin Rakoff constructed as a modern riff on Brief Encounter. I'm the repressed housewife but I have an affair with a gorgeous young man played by Leonard Whiting from Romeo And Juliet fame. And at the end there's no guilt, no remorse. We just go on our merry way. Critics were outraged when it came out (in 1971)."
After divorcing Granger she married Richard Brooks who directed her memorably in Elmer Gantry (1960) and the Happy Ending (1969) --they divorced in 1977..
She was candid about her long fight with alcoholism which she partly attributed to her innate shyness.
"I can act with a Larry Olivier or Cary Grant. But I cannot go alone into a supermarket and buy a jug of milk. I just do not know how, that role escapes me."
She spent her last years as a recluse in her Santa Monica home watching her old movies and coming to appreciate her subtlety as an actress in demanding roles.
Jean Simmons is survived by her two daughters Tracy Granger and Kate Brooks.
Posted by james bawden at 2:49 PM