Luke Kirby Has A News Series 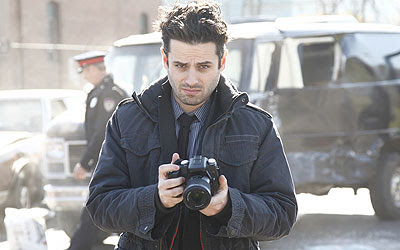 My first glimpse of Luke Kirby finds the talented star of the new TV series Cra$h & Burn chain smoking outside a Mississauga high rise office complex where interior scenes are filmed.
I get it. He doesn't much enjoy interviews. Plus being the front and center attraction of a new show means lots of stress.
And the buzz in this new 13-part hour drama premiering Wednesday at 9 p.m. on Showcase is pretty high.
"The series' creator Malcolm McRury originally pitched it for HBO in the States," reports executive producer Frank Siracusa (H20). "We (Whizbang Films) were lucky to get it and make it as a sort of first --a dramatic series set in Hamilton and actually made in Hamilton."
Kirby is perfectly cast as Jimmy Burn, a cocky yet harassed insurance investigator whose misadventures with a rogue's gallery of claimants constitute the core of the adventure.
Also cast to advantage: Leela Savasta (Battlestar Galactica) as his live-in gal pal named Lucia and Clark Johnson (Homicide) as a shrewd veteran investigator.
"We shoot mainly in Hamilton," says Siracusa (Slings And Arrows). "What a wide variety of locations, it's wonderful. Then we found this complex now empty so we've set up the set for the office and one for Jimmy's apartment. The only downside is the travel time coming in from Toronto."
On set I'm watching Kirby and Savasta mine comic gold out of a scene finding Leela trapped in a horrendous Seventies bridal frock while Kirby complete with hangdog expression is noncommital about the whole event --for his list of friends Jimmy offers only an adopted mother who might come. Talk about being a loner.
I first watched about Kirby on the set of Slings And Arrows where newly graduated from Montreal's National Theatre School was playing a movie star determined to play Shakespeare to prove he was more than a pretty face. Kirby perfectly captured the sadness and sweetness of Jack Crew who suspected peers were laughing a bit at him behind his back.
And it's a route Kirby, now 31, has plainly decided to avoid. He could be co-starring in any one of a half dozen U.S. series if he really wanted to but knows it would mark the end of his development as a serious actor.
And he also recognizes the irony of winding up back in Canada after embarking for Brooklyn and stage jobs in the U.S.
"Yeah, I was born in Hamilton. I'm back," he laughs. His American parents lived outside Guelph, used McMaster Medical Centre for the birth.
"I'm now seeing all parts of the city."
Kirby had relocated to Brooklyn but came home "because the scripts aren't a formula like most TV work. Jimmy isn't entirely the hero, he's not all nice. Stories are funny but also very dark. Who wouldn't be attracted to such scripts?"
And what about the pressures of being a TV series star?
"It means 14-hour days, I'm not really afraid of that. The stories are the attraction here. Being in the insurance game is like being in a vice. The clients need their money, the company can't pay too much or it won't make a profit. Jimmy is learning about the system. It's very real to life."
Siracusa says Canwest asked the scripts be acceptable to both cable and regular networks so a bit of toning down was done. But the opening hour uses words not normally heard on TV as well as graphic images calculated to shock.
When Kirby says "dark and edgy" he's right: one character in the first episode is about to expire from prostate cancer and keeps tinkling right on camera. Jimmy and his gal make out in a car complete with the kind of groans network TV avoids. But at the same time the quirkiness often seems hysterically funny.
People who think Kirby can only do comedy should check out his 2006 TV series Northern Town--the wry comedy was quickly buried by CBC.
Although I watched Kirby acting on Slings And Arrows I chose on that day to interview his on screen partner --Rachel McAdams whose next project (The Notebook) vaulted her into movie star status.
"I'm happy for her, it's deserving," Kirby says.
Other leading ladies have included Sarah Polley and even Lindsay Lohan --in a pretty decent TV flick from last year titled Labor Pains.
Kirby's growth as an actor has been more measured than McAdams' stardom sprint: I've spotted him in TV guest roles on Law And Order and Eleventh Hour but he's also done New York stage work.
What comes next depends on how Cra$h & Burn fares. It's the first hour drama solely commissioned by Showcase without U.S. pickup (as with Queer As Folk). An American sale would surely guarantee a second season.
CRA$H & BURN DEBUTS WEDNESDAY NOV. 18 AT 9 P.M. ON SHOWCASE.
MY RATING: ***1/2.
Posted by james bawden at 8:08 PM