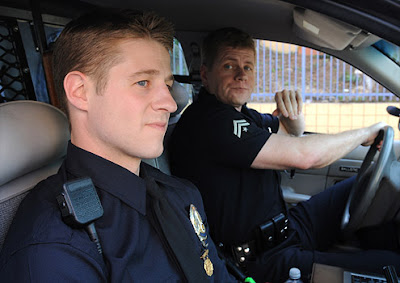 First series to get the cancellation axe was the dreadful The Beautiful Life.
Now it's Southland's turn.
After completing six new episodes the police show with Benjamin Mckenzie was pink slipped even before a single new episode got to air. The ratings anemic (but cheap to produce) Dateline will continue running Fridays at 9.
The series was critically acclaimed but NBC has fewer dramatic slots to fill now that Jay Leno is on weeknights at 10.
Warner Bros. intends shopping the critically lauded series to various cable weblets.
Over on Thursdays at 10 CBS's The Mentalist easily outstrips ABC's Private Practice which only retains 2/3 of the audience of Grey's Anatomy.
Look for PP to get moved by midseason at least.
And over at that weblet CW they're ecstatic over the large Thursday night female audiences for The Vampire Diaries. Yes, I know it's a TV reworking of Twilight: teen vampire in high school falls for alienated young thing.
But the vampire soapera is starching first in its timeslot among women 18-34, the very audience sponsors want to reach.
.
Posted by james bawden at 2:59 AM