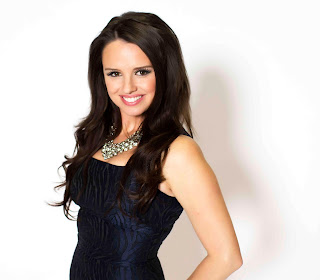 Best news of the festive season is the return of Royal Canadian Air Farce for the annual New Year's hour long special.
But since New Year's Eve falls on a Saturday this year you can catch the special a day earlier on Friday December 30 at 8 p.m.
Then the repeat will be on Saturday night following the love NHL game at around 10 p.m.
And there's a third time to catch it Sunday January 1 at 7 p.m. Got all that?
I even got to attend last Friday's taping of the "hour" which took three hours at CBC's Toronto studios because skits had to be repeated and sets had to be dismantled and others nailed into place.
The audience took all these delays with good humor --the audience was an older one although I noticed a smattering of kids and teens as well.
I've been covering RCAF since the gang first appeared at Hamilton Place in 1976 for tapings for their CBC Radio show.
And the passage of time means Dave Broadfoot, Roger Abbott and John Morgan have all passed.
Only Don Ferguson and Luba Goy are still around from those days.
Well, times change and there were decades when Goy was the only female comic present.
This time out Jessica Holmes is present along with Emma Hunter and Aisha Alfa (The Beaverton), Craig Lauzon, and Darryl Hinds (Little House On The Prairie).
Meaning for the first time in RCAF history the gals outnumber the guys, am I right?
I'm not giving anything away by stating there are such special guest stars as Peter Mansbridge, Yannick Bisson, Ron MacLean,  plus politicos Tom Mulcair, Elizabeth May and Scott Brison.
There was a first taping Thursday night and some of the skits were taped then.
I never know what will get in and what must be excised for time --an hour on CBC these days runs 48 minutes.
First up was a jolly skit featuring the likes of Laura Secord, Nellie McClung, Mary Pickford and it got big laughs I can report.
But the gang did it all over again with the quip "Welcome to the Re-enactors Club." In between skits the gang intermingled with audience members in the front row.
"I'm about to do my Celine Dion" was one quip that got a huge ovation.
In between Farce Films ran selected spoofs of TV commercials. Captain Obvious got his due knocks. A Loblaws commercial was first class. I also liked Craig's parody of Justin Trudeau.
A Putin meet with Trump was well written.
Also neat was something called Census Jail and a spook of Brexit had Kate trying to get rid of aged Queen Liz.
And the F-Bomb reigned supreme--I could tell you the targets but I won't.
I thought all the skits I previewed were fast and funny but not all can be included in the edited TV version.
A few days later I talked to Emma Hunter on the phone--I've become a nig fan of her rambunctious comedy style..
I'm a big fan having seen her on episodes of Pop Quiz and her hilarious efforts to get under the skin of resolute quizmaster Devon Soltendieck.
"We taped five episodes a day for a total of 60 half hours and they're still playing to high ratings."
First of all she's from Etobicoke which explains a lot although there are traces of an English accent courtesy of her parents. She's also been in the series The Beaverton and Mr. D and last year was in a NBC comedy pilot that didn't sell.
This year she can't go down to L.A. for the annual pilot season because as she announced to the startled audience "I'm pregnant" and she pointed to her husband who was sitting directly in front of me.
I think Hunter, Holmes and Alfa would be great additions with the older regulars should CBC ever decide to remount RCAF as a weekly half hour series.
One big problem: the costume and prop departments had a fire sale and have ceased to exist.
"But there will be a summer special to mark Canada's 1250th Anniversary," Hunter assures me. "We're already thinking of ideas for that."
RCAF NEW YEAR'S EVE SPECIAL: PREMIERES ON  CBC FRIDAY DECEMBER 30 AT 8 P.M.
THE FITRS REPEAT IS ON SAT. DECEMBER 1 AT 10 P.M. WITH A SECOND REPEAT SUN. JANUARY 1 AT 7 P.M. 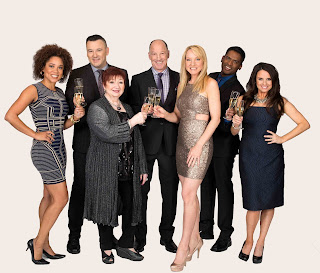