How To Prepare For Prison Is A Must See 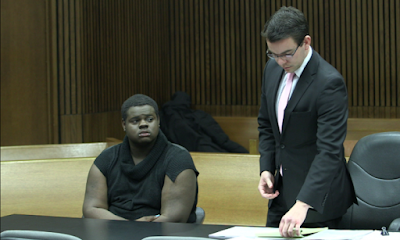 Of course I immediately wanted to watch How To Prepare For Prison as I soon as I spotted the brilliant title.
But when I popped in the preview DVD there was a space of about 10 minutes when the sound went off.
I kept watching anyway because of the terrific images which are riveting --most TV documentaries are shot in a flat, unimpressive style.
Here the images are muted, sometimes in silhouette as the camera lingers over eyes filled with tears, lonely figures on the landscape and sometimes grit and determination.
That's because director Matt Gallagher also functions as cinematographer.
Check it out Wednesday night at 9 on TVOntario (available the next day on tvo.org).
Gallagher has produced a real winner, the kind of challenging premise one used to find all the time on CBC but here it's TVOntario.
I was once accused at university of a crime which I never committed --it was somebody else with a similar name!
But it took me weeks and a high priced lawyer to clear my name so I know all about that creeping feeling of sickness in the stomach and night sweats and trembling.
This is the real reality TV --we come to know these accused as caring, feeling people trapped in a system they do not full comprehend.
What astonished me was Gallagher's compassion,his refusal to pass judgment and his constant search for the humanity of each of these accused subjects.
Are they innocent or guilty? Or is it the system which does not seem to always work.
Some viewers may wonder why Gallagher has selected both American and Canadian accused subjects.
And I think I know the reason : with the Americans we get to go into the courtroom and watch how justice is meted out.
But cameras are not allowed in Canadian courtrooms which I think reduces the degree of tension in tv storytelling.
Gallagher shows the judicial system is a competitive race of retribution versus rehabilitation.
And here we meet Lee Burrell, a Dallas man sentenced to four decades in jail after a botch armed robbery --he was shot in his legs and these days gets around legless in a wheel chair.
The tension of watching these people wait around for their sentencing is palpable --I simply couldn't turn away.
Gallagher who is also a skilled interviewer spent three years talking to judges, lawyers, family members and even the police.
What these accused have to go through as they await their future is, I submit, a form of cruelty in itself.
We meet the three accused and we feel for them as caring people.
There's Joe who was arrested for marijuana production --he says he rented out a facility --and traffickers were growing marijuana and he never knew what was going on.
The toll on his wife and little children is unbelievable.
Then there's Detroit based Demarco who is accused of striking a female which he denies --he is coming out as gay and feels intense pressure from this charge.
And there's Alberta's Christy accused of embezzlement --she says she lost her baby because of the ongoing tension and her husband left her.
Then she hires a prison consultant who coaches her on what to expect if she is indeed sentenced to a jail term.
I won't give away the three endings but viewers will surely suffer along with the accused.
I think viewers will surely wonder how they'd react in similar circumstances.
And I think that emotion makes How To Prepare For Prison a TV documentary to be remembered.
HOW TO PREPARE FOR PRISON PREMIERES ON TVONTARIO WEDNESDAY NOVEMBER 16 AT 9 P.M.
MY RATING: ****.