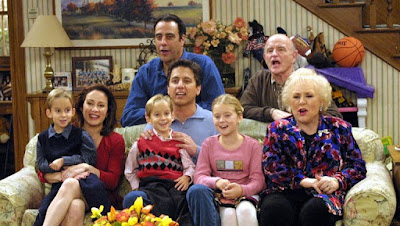 ATX quickly cancelled a proposed reunion of the cast of Everyone Loves Raymond after the death of Doris Roberts.
The fifth annual ATX Television Festival had been planning a grand on stage reunion of the sitcom stars (minus the late great Peter Boyle).
I find it hard to believe obituaries stated Roberts was 90 --after all she was phoning me up about possible work in Toronto until just a few years ago.
The gifted comedienne won five Emmys for her magnificent turn as the caustic wife and mother Marie Barone.
And I remember she even journeyed to Toronto during a rare Canadian TV Critics Tour when she was over 75 to "promote the show but also do some shopping on the side. and have dinner with my friend Brian Linehan."
I asked if she re membered the first time we'd met.
"Surely! It was on the set of Remington Steele," she laughed. "And I was the one who told you that our two stars never talked to each other."
I remember the last time I chatted briefly with Roberts her son Godfrey was still alive --he passed away  more than a year ago
Roberts picked up her first Emmy for a 1983 guest appearance on St. Elsewhere.
In 1983 the producers of Remington Styeele were intent on making cast changes to pep up the ailing series.
They envisaged a new character Mildred Krebs who could give Stephanie Zimbalist a run for her money.
"Instead they settled on me after I read for the part," laughed Roberts. "I wound up co-starring in the next 72 episodes."
Then along came Everyone Loves Raymond/
"I styled that woman on various aspects of producer Phil Rosenthal's Jewish-German mother. Also, I added my own spin. She's always interfering only she doesn't see it like that at all.
"I was always in the biz," she once told me --her stepfather and mother ran New York city's Rosenthal Agency which catered to actors and playwrights.
"Originally I studied journalism at New York University but the acting bug got me and I was on Broadway in small parts starting in 1955.
In 1961 she made her movie debut in Something Wild and by 1969 was billed fourth in The Honeymoon Killers.
"Did you know that I was the original choice to play Vivian opposite Bea Arthur on Maude? Well, I was."
You can spot her in such flicks as Used People, The Night We Never Met and the Billy Crystal comedy My Giant.
In September 2002 she testified before a special U.S. Committee about aging complaining that many of her contemporary thespians over 40 were jobless.
She's survived by son Michael who was also her manager.
And I'm missing this original already.