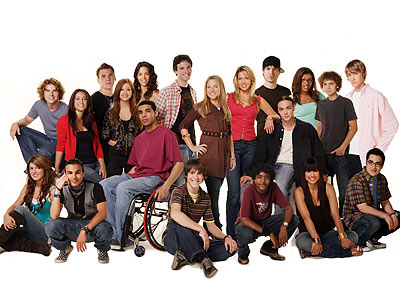 "Are you aware of the series Degrassi?" a mom down the street asked me.
She'd just heard the joyous news Degrassi which was facing cancellation has been saved yet again-- this  by Netflicks --a decision that will made our "Canadian" commercial networks as mad as hell.
Aware?
I was the first TV critic on the set of Kids Of Degrassi  which creators Linda Schuyler and Kit Hood first presented way back in 1979
I was then with The Hamilton Spectator but all the big time TV critics in Toronto simply ignored it.
"I'd never go on the set of a kids' show like that," snapped The Globe And Maik's Blail Kirby when I asked him about it.
Well, I did and I never forgot it.
The first offering consisted of a mere 24 episodes made between 1979 and 1984 -- CBC ran them in the late afternoon children's slot with TVO picking up the repeats.
I remember taking the Queen streetcar over to the Beach area to interview the very pleasant Schuyler who was both creative but also concerned about the well being of her young charges.
My favorite was "Charles Buys A Suit" where the tyke bought a new suit for his father's wedding at Moores.
Later on I met up with Schuyler in Redondo Beach where she was peddling the next series Degrassi Junior High to PBS.
She had three of the "stars" up on stage with her and mentioned one troubled youth was staying with her.
I remember blond Neil Hope was up there along with darkly handsome Pat Mastroianni.
Critics sitting with me said it obviously was Mastroianni but in reality he came from a strong family.
It was Hope who was troubled --he later disappeared for years only to be reported dead in Hamilton a few years ago
Schuyler later kept up a trust fun to get some of her charges into university.
When Degrassi High finally died in 1991 she tried an adult soap opera called LIberty Street and later mounted an hourlong soap opera called Riverdale but CBC only had the funds for 12 episodes the first year.
Degrassi: The Next Generation revved up in 2001. CBC balked because it had no money so the series ran on MTV in the U.S. and CTV up here .
After 14 seasons MTV cancelled out so in stepped Netflix and Family Channel.
Netflix also has Trailer Park Boys --more new Canadian content than you'll see on "Canadian"
Schuyler's Epitome PIctures has morphed into a very rich concern --DHX Media paid $33 million for the library a few years ago.
Now she has her own back lot in East York not the ratty old vet office on Queen Street East.
But I'm warning her --at a recent meeting weith Grade 6 students I asked their favorfite kids series.
And 2 to 1 they picked The Next Step over Degrassi.
Time moves on for all of us.