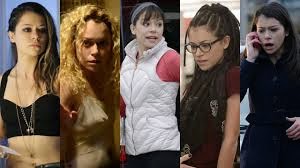 So there I was at a high end dinner party and I was doing what every TV critic does in such august company.
I asked every guest in turn for his or her list of "must see " TV shows.
I'm always doing this and I got the usual list of suspects in return: Game Of Thrones, Mad Men, Downton Abbey, Sherlock Holmes.
Then one guest ventured "Orphan Black" and I froze.
This was the first Canadian made series I'd heard mentioned in many years. Not since The X Files (made in Vancouver) had a Canadian show made it into the list of lists.
Look, there are some very well made Canadian dramas out there: Murdoch Mysteries, Heartland, Saving Hope, Rookie Blue.
But none are aywhere near the "must see" category.
Orphan Black is and it sort of crept up on us.
First there was the annual TV Critics Awards where its Canadian star Tatiana Maslany snatched the Best Acress in a Series award away from far more familiar faces.
Then Tatiana made the cover of Entertainment Weekly --when did a Canadian show accomplish such a feat?
In fact just last night I caught Maslany in an old rerun of CBC-TV's Heartland --five years back she was just another struggling young actress with buckets of potential.
Now she's dazzling because she plays a whole host of strangers who look like each other.
And she's certainly convincing in each portrayal catching the right accents and being just enough different to be more than a little spooky.
When I chatted her up last year the series had yet to debut and she was still unknown.
She was preparing to depart that afternoon to New York city for her first round of interviews and didn't quite know what to expect.
One thing is certain --she'll never be unknown again.
I told her an anecdote about interviewing the great Bette Davis who played twins on two occasions and said the experience was unnerving and Tatiana laughed nervously.
I'm sure playing twins would be considered relatively easy after what she's been through.
After all she is first glimpsed as con artist Sarah who soon discovers she has a twin in cop Beth.  And then there's assassin Allison and scientist Cosima and....and....
I still relate best to clone number one Sarah although I also like clone number two Beth.
Maslany gave me a detailed description of the trick photography that makes it possible to have the two of her not only chat each other up but touch each other.
But the point is expert makeup and hairstyles are not enough. At the end of the day it all evolves around Tatiana's mesmerizing power to become other identical looking people and be convincing about it.
A lot of the success goes to creators Graeme Manson (Cube)  and John Fawcett  (Ginger Snaps) who have insisted on a look that is very expensive indeed.
The show, of course, does have a problem as it begins Season Two: the element of surprise is gone. And I'm thinking too many clones could simply result in mass confusion.
Let us all remember more new series fail in their second season than in their first.
In a way it all devolves on Maslany --can she keep us guessing?
One thing about Orphan Black: it shows a series can be Canadian and still be creative and audacious  and that's a major step forward.
ORPHAN BLACK SEASON 2 PREMIERES ON SPACE SATURDAY APRIL 19 at 9 P.M.