Where Am I?: Top CBC Fare 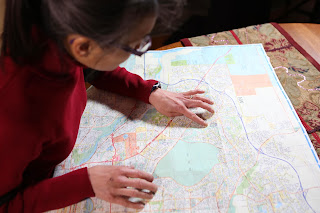 The burning question of the day is the future survivability of the CBC.
So I'm asking every one to tune in to this week's Nature Of Things offering, a fantastic hour documentary titled Where Am I?
It revs up on CBC-TV Thursday night (Dec. 5)  at 8. Got that?
You'll watch --as I did with a preview copy --and all doubts about the ability of CBC to continue as public TV will surely be resolved.
Where Am I? certainly could not exist on any other network.
It's a long labor of love from director/writer Bruce Mohun and looks at a persistently nagging question I've always had: how do we get from here to there and still know the way.
"Years ago we pitched this idea to Nature Of Things," says Bruce Mohun on the line from his Vancouver office, "and we were told the subject had already been snapped up."
But Mohun is persistent and he asked several years later why the anticipated documentary had never shown up only to be told it was abandoned.
"We snapped it up and here we are," he says with a chuckle.
The broad subject is navigation skills. Some of us have the ability in spades. Others like yours truly can get lost walking down any long, winding street.
Which is what I did the first time I was in London.
I deposited my bags at the Russell Hotel took a walk and found myself going in the wrong direction as night fell. A very nice bus conductor told me the points of reference I was using were just plain wrong and I wound up hailing a cab to get back to Russell Square.
Mohun says some people are good at it, others less so.
He also tries to come to grips with the notion men are better at directions than women thinking this goes back ten thousand years when males were the hunters and gatherers.
Some of the studies he looks at say taxi drivers are much better at this than bus drivers as they do not proceed over the same fixed routes all the time.
But since many taxi drivers are now using GPS the actual size of those brain muscles that help them out are expected to shrink to the size of a bus driver's.
I agree this hour could have turned out deadly dull.
Instead it is chock full of exciting visual moments.
One test expertly caught by Mohun looks at veteran Inuit hunters who even in "blowing snow" conditions can find their way home.
I'm not going to ruin your pleasure by explaining how here --just watch and understand it's a technique not always being passed on to the next generation.
Another great scene involves desert ants in a Spanish made game of survivability and navigation skills. Just how do those tiny pin prick brains of theirs always manage to steer them in the right direction?
The talking heads interviewed here really do talk up a storm: University of Calgary's neuroscientist Giuseppe Iaria who ventures into the frozen north, Canadian psychologist Nora Newcombe of Temple University, Roboticist Michael Mangan of the University of Edinburgh, and Jeopardy champion Ken Jennings who constantly immerses himself in maps and when tested is indeed at the head of the class for navigational skills.
Visuals are excellent and there's even the warning that turning off your GPS and trying to solve problems of dislocation could be aids in battling Alzheimer's,
Where Am I? took a long time to make and no other network but CBC would be prepared to run such a challenging hour --and remember Nature Of Things tosses these off effortlessly every week.
Mohun made it for Dreamfilm Productions which has won Geminis in the past and may win more awards with this one.
Cheers also go to the director of photography (John Collins) and the editor (Tim Wanlin) and veteran producer Sue Ridout.
Mohun claims I once reviewed a TV comedy show he'd written "in the 1980s" --that would have to be 1989's Starting From Scratch starring Connie Stevens, right Bruce?
Right then Mohun apologized for ringing off --"we have another one for NOT on allergies coming up in February --we're editing it right now."
WHERE AM I? PREMIERES ON CBC-TV's NATURE OF THINGS THURSDAY DECEMBER 5 AT 8 P.M.
MY RATING: ***1/2.