There Is Hope For Canadian TV 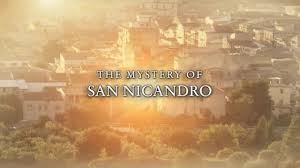 I'm suddenly encouraged by the state of Canadian TV and all it took to turn my mind around was one exemplary documentary.
Titled The Mystery Of San Nicandro this 67-minute look at the lost and found Jews of a tiny Southern Italian village has everything going for it. The premiere is Sunday November 18 at 8 p.m. on CBC's Documentary channel.
Here is a saga of human struggles, of hope, of triumph and all contained in a hardy band of just 80 believers.
"I first got the idea from John Davis's book The Jews Of San Nicandro," says respected veteran producer Vanessa Dylyn. "He looked at a community in a tiny place where some inhabitants had chosen to abandon Christianity and find religion in the Old Testament."
The charismatic leader Donato Manduzio had been severely injured fighting for his native Italy in the Great War. In the 1920s he was given an Italian translation of the Old Testament and what he read struck him as a revelation.
He yearned to go back to that way of life, the way God was celebrated in a different way than in his Catholic faith. As he read more he became an apostle for a pure form of Judaism and eagerly started converting family members and friends.
If Manduzio had been too successful church authorities would surely have stepped in and stamped out the "heretics". As it was Mussolini's Fascist system fined the congregation for unlawful religious observances. --just as Protestant congregations were fined.
But in the widespread rounding up of Italian Jews in Italy in 1944-45 this band escaped harm's way because of geography --they were in the Allied occupied part of Italy.
And after? All but three women joined the Jewish exodus to the new state of Israel where they were scorned by conservative rabbis as not really being Jewish at all.
"It's a historical story first," explains Dylyn. "The central character wasn't sophisticated at all. Yet it was his beliefs that sustained the flock for 20 years.
"Davis's book ends with the emigration to Israel. We wanted to pick up the story but at first we couldn't find anyone who wanted to talk. It was the way they'd been treated when they arrived. Were they really Jews or some sort of Christian sect."
And indeed they were first housed in what looks suspiciously from the photos like internment camps. Young boys and men were forced to undergo circumcision.
It took a powerful lot of prodding by writer/director Roger Pyke to get some comments from the descendants. They simply did not want to face additional discrimination.
What was discovered is according to Dylyn's phrase "the gift of documentary heaven".
Pyke discovers a rich treasure trove of artifacts proving southern Italy once had a thriving Jewish community --all this was erased during the Spanish Inquisition. Many Jews converted to avoid torture or death but they carried elements of their Judaism with them and passed this rich heritage on to their children.
One woman refurbishing her old inn discovered deep caverns where Jewish practices had thrived in Roman times.
And one woman who denied there ever was a Jewish influence sees her husband trot out with the original deed naming Jews as the first owners of their house.
The real life stories are riveting. A woman named Incoronata is delighted to be remarried in the Jewish faith. An Ontario woman now understands why her "Catholic" family set a white table cloth and two candles every Friday.
A nearby female rabbi who continues to document this saga says these days she has better relations with the Catholic priest than the conservative rabbis who distrust her.
This powerhouse of a film  (from Matter Of Fact Media) moves very swifty and opens up an important part of history few of us could have known about.
THE MYSTERY OF SAN NICANDRO PREMERES ON CBC'S DOCUMENTARY CHANNEL, SUNDAY NOVEMBER 18 AT 8 P.M.
MY RATING: ****.