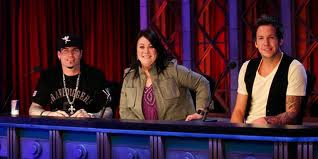 I had this terrible feeling in the pit of my stomach just before I put on the DVD preview of Canada Sings.
And boy was I wrong!
I usually stay away from reality things but Canada Sings really grabbed me.
Simply stated, it's quite a lot of fun.
"I agree", says one of the judges, Jann Arden ,who met with me at the Pantages hotel.
Arden watched the first audition tapes to come in.
"I first thought --reality TV? Blah! But this isn't about chasing the fame game. It's really about coming together, bonding, working as one.""
The first tape she put on made her gasp. "I cringed. It was the Toronto zoo team and they were so out of it I didn't think any amount of work could get them into shape. But here they are months later and they're quite compelling."
Canada Sings which revs up Wed. Aug. 3 at 9 p.m. on Global TV is a six-part series that takes seemingly ordinary Canadians and has them forming glee clubs to compete for top prizes.
A little bit of American Idol, a whole lot of Glee, and much luck and presto these instant entertainers must strut their stuff before TV audiences.
The judges beside Arden include Vanilla Ice and Simple Plan vocalist Pierre Bouvier.
It started with casting calls from Insight Production as would-be participants sent in five minute audition tapes.
The whole process took six months from the first call and after interviews conducted by casting producer Heather Muir the final 12 teams were announced.
"It was then that the real work began" Arden told me. "Each team got a top choreographer and vocal coach to help iron out the wrinkles".
Six teams studied under choreographer Kelly Konno and vocal coach Scott Henderson --the other six teams were taught by choreographer Christian Vincent and vocal coach Sharron Matthews.
For me, a viewer, the fascination really started with cameras covering the arduous rehearsals of the competing teams. Since I only got to watch Video One that would be the "Junk Notes" --the team from Vancouver's 1-800-GOT-JUNK? as well as "The Zooper stars" from Scarborough's Toronto Zoo.
I don't know when I've felt so sorry for anyone as when the well meaning but seemingly clunky Zoopers first assembled.
Oh, they're a grand group and we get to know them personally, animal keepers, vets, clerks all trying to put one foot in front of the other. And all they want out of it is the $10,000 prize to help update the Animal Health Center.
But they're just terrible jumping around, trying to keep any song in key. And there are breakdowns and many stumbles.
And yet the team does seem to be getting it together as the weeks go on.
The Zoopers are up against the Junk Notes who already have two terrific young male members who can really sing.
And this gang are fun to watch from the beginning. They're a younger bunch, more hep and really motivated for that prize money.
Then tragedy strikes as it must on all reality outings --the baby of the lead singer is seriously ill, rushed to hospital. Will the main singer have to forgo the competition to stay with his son? Stay tuned, as they say.
Other groups we'll later meet include The Hammer Cruisers (Hamilton coppers), Edutones (teachers from a Vancouver high school), The Power Chords (fitness instructors in Toronto), , Keg Spirits (Keg Steakhouse employees) and Wolf Pack (software experts in Ca,bridge).
Once she had signed up Arden told me "I made sure I had enough time to really get involved. I know you want me to tell you the winners but they're all winners to me. I really got into this competition and as far as I could see all these groups seemed thoroughly professional the day they were performing."
So who's the Simon Cowell? "None of us. We're commentators. I don't tear into anybody. I'd never do that even if they stink and all these acts were polished and winning. I think of myself as a fellow performer offering tips."
Arden has a tight schedule these days --she is also hosting a CBC Radio One show this summer she hopes will be picked up for another run.
Is there time in her schedule for a second season of Canada Sings?
Says Arden :"I surely hope so. It got me hooked. I'm thinking this is a pilot for a whole season that will link all parts of Canada. I'm getting enthusiastic about it just talking to you."
CANADA SINGS PREMIERES ON GLOBAL TV WED. AUG. 3 AT 9 P.M.
MY RATING: *** 1/2.