Almost Heroes: Give This Series A Chance! 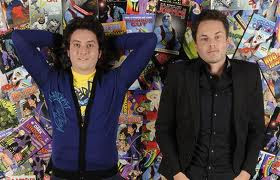 It was back in November that I took the Queen streetcar literally to the end of the line in Etobicoke to get on the set of a new comedy series then only known as The Belleville Brothers Project.
The one camera show was supposed to rev up on Showcase "in early 2011" but it has taken longer to get it all together.
Shot at a redecorated strip mall and retitled Almost Heroes the end result is, well, unusual, challenging, fascinating, a real comedy work in progress.
The show actually takes Showcase back to its roots and the days it featured such experimental comedy shows as It's Me Gerald! (remember that one) and the great lawyer comedy Billable Hours.
The setting is a real strip mall but in this case fabulous mock shops were created including a comic book store and an odd store featuring an array of trashy fashions.
In fact the trashy fashions place looked so authentic a nearby resident stormed in to ask what was the owner thinking in pandering to the baser instincts of impressionable teens?
Told it was only a set, she stormed out in high indignation.
the plot has Terry (Paul Campbell) returning to his small town to help out at the "Silver Salmon" which he inherited with his nerdy brother Peter (Ryan Belleville).
The premise finds them trying to balance their different personalities and at the same time make enough money to save the troubled enterprise.
Ryan Belleville is a diminutive guy with a sad sack smile. He's a real comedy find and has been in training for years in comedy clubs.
He's in a creative partnership with his older brother Jason Belleville but there's an awful lot of comedy heavyweights involved in this one.
Behind the scenes I spotted and chatted up Dan Redican (The Frantics). Other writers include Fraser Young (The Latest Buzz),and Laurie Elliott (6Teen).
Others in the cast include Colin Mochrie, Megan Heffen, Athena Karkanis,David Hemstad.
"It's about guys truing to find themselves," Jason said. "And it's for more than just comic book freaks. It's more about family."
And, no, the Belleville boys did not grow up in Belleville.
" Actually we're from Calgary," Jason says. But the spent years on the road in comedy clubs honing their trade. Ryan has been in such series as She's The Mayor while Jason has written for such hits as Little Mosque On The Prairie.
Despite mutual careers in comedy Ryan points out "It's weird but we never worked together on TV before this. It just never happened."
Paul adds "It's crazy but we both just became fathers. For the first time. So it's like some days I'm haggard from all nighters, then it's Ryan's turn. Then there are days when we're haggard together."
Ryan says he's usually hired to spruce up a series. " Do my best but it's not my show. This one is. I'm feeling the responsibility. So is Jason. But there's only so much two of us can do. We also enlisted help from some heavy lifters."
These include Mochrie who is in fine form as the oddball security mall guard named Boyd. And from Second City there's Lauren Ash as childhood friend Bernie.
In fact I've just re-watched the June 11 episode with Ryan trying to retrieve a $3,000 comic book his brother carelessly gave away --it accomplishes what the guys said was their main aim --to make us care about the suburban mall misfits.
So I hope Showcase gives Almost Heroes a chance to grow and find its audience.
And last time I looked those faux stores in the little strip mall were still there just in case a second season is ordered.
ALMOST HEROES RUNS THURSDAYS AT 9 P.M.ON SHOWCASE.
MY RATING: ***.
Posted by james bawden at 12:22 AM