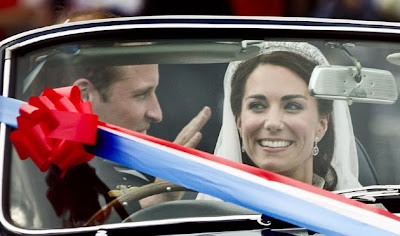 So who didn't watch TV's latest reality show, a one off special that could have been titled The Real Housewives Of Windsor Castle?
Well, NBC's Brian Williams for one.
The NBC news anchor spent just three hours in London before deciding the deaths of hundreds of Americans in a night of killer tornadoes was far more important than the carefully pre-planned nuptials of Prince William and his Kate.
And Williams has a point.
Oh, the Royal wedding really was something else, a candied confection of epic proportions but at its heart a rather empty charade.
But Williams heard about the devastation the moment he landed at Heathrow airport, phoned NBC News chief Steve Capus, and was back across the Atlantic that night.
His quick, decisive moves left the other anchors looking rather silly as they oohed and aahed at the tumults of well wishers on the London streets and the rich and famous parading forth at Westminster Cathedral.
CNN's Anderson Cooper looked a bit foolish as he tried to get himself pysched up for the event --eventually he said it was all very cool.
Anderson, it was a lot of things. But definitely not cool.
Barbara Walters at ABC told us once again how many Royals she's interviewed over the years --but surely not the Queen who so far has sidestepped going on The View.
But her ABC "frenemy" Diane Sawyer then could get in she had actually chatted up Prince Charles at the family estate.
And just what were the Canadian anchors doing so far from home?
Hey, Peter and Lloyd, there's a political tsunami due to wash up Monday night with recent polls suggesting the NDP is surging at the polls.
Should you not be back in Ottawa preparing for that contingency?
Malcolm Muggeridge way back in the 1950s predicted that with the waning of Queen Elizabeth's political power there was nothing left for the Royals to do but dress up and parade about.
And we the TV viewers have been suckers every time --I stayed up all night to cover the wedding of Princess Anne and Mark Phillips and that ended in divorce.
And so did the weddings of Princess Margaret, Prince Andrew and Princess Charles.
But at 4:30 a.m. I looked out the window and saw the lights on in a considerable number of my neighbors' houses on the Toronto street where I live.
So, yeah, I bought into the myth. I gasped at some of the hideous fashions, wondered just what Kate would wear, nodded approvingly as the aged Queen arrived all in yellow.
Look, as spectacle it worked.
Then I remembered I'd also stayed up all night to cacth the indescribable, sad funeral of Princess Diana, William's mother.
In those days the crowd were ready to tar and feather those blasted Royals for the way they'd treated the "People's Princess".
Now it's all forgotten. That's in the nature of bread and circuses.
It's just as Muggeridge predicted: royalty as soap opera. Stay tuned for the next, inevitable installment.
Posted by james bawden at 9:07 PM