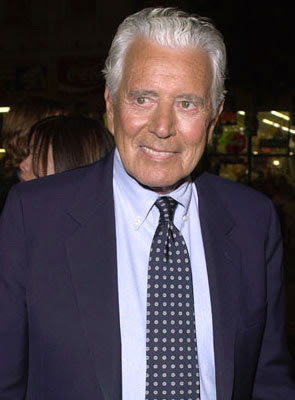 Yes, the late, great John Forsythe was a polite, sensitive, considerate man. And also a TV icon.
How do I know all this?
Because I spent time on the set of Dynasty before it ever got on the air.
I was following series creator Esther Shapiro around--she was already beginning epic battles with creative co-producer Aaron Spelling.
And she suggested I sit down and talk for a bit with series star John Forsythe. Already he was a big TV name.
"Alfred Hitchcock told me to stick with TV and he was right," smiled Forsythe.
"Series television has been very good to me."
Originally a Broadway actor (Mr. Roberts), Forsythe was on TV in the early and dangerous days of live TV. He remembered on one live show where the corpse simply got up and walked off camera.
Soon Forsythe with his smooth good looks soon was co-starring in all the big live shows of the day: Robert Monthomerty Presents, Lights Out, Suspense, Philco Playhouse, Danger.
But movies had always been his intended destination. "I was in Loretta Young's last movie ever --before she jumped into series TV. That was 1953 and it was called It Happens Every Thursday. Then made the movie The Glass Web, Escape From Ft. Bravo, still in 1953. Then in '54 I went to Hollywood to make The Trouble With Harry for Hitch."
It was Hitchcock who thought Forsythe's charm and easy mannerisms would be better suited for television. "After a few more movies like The Ambassador's Daughter (1956) with Olivia de havilland I took his advice."
From 1957 through 1962 Forsythe was TV's Bachelor Father as the utterly suave Bentley Gregg, bachelor millionaire lawyer with a young niece to look after.
"Went back to movies. Kitten With A Whip is the title people seem to remember. But there was also Madame X with Lana Turner."
Forsythe tried sitcom land a second time with The John Forsythe Show cast as Major John Foster but it only ran 29 episodes (1965-66). Then came a third sitcom, 48 episodes of To Rome With Love (1969-71).
His most famous series Charlie's Angels ran 109 episodes (1976-81) and Forsythe famously was never seen only heard as the voice of the Angels' boss Charles Townsend. He repeated the assignment in the subsequent movies.
"Easiest job I ever had. I'd saunter into the recording studio, do my stuff and get out in time for a day of golf."
By the time we met in 1981 he was back at it as Blake Carrington in Dynasty which ran 217 episodes (1981-89). "To be perfectly frank I was not the first choice."
Aaron Spelling first envisaged George Peppard and Angie Dickinson as Blake and Krystal Carrington and both first choices respectively declined.
And there was still one more series, a return to sitcoms in The Powers That Be (1992-93).
See, Forsythe's acting style borrowed from Cary Grant. Both famously played debonair gentlemen who never strained for effect. And despite Hitchcock's admonition Forsythe could be startlingly effective in movies (In Cold Blood or And Justice For All).
In recent years he'd survived quadruple bypass surgery and colorectal cancer.
I was grateful for the time he gave me that busy day but he always made everything seem so easy and gracious. It's why TV audiences trusted him for almost 60 years.
And why fans still watch him in Dynasty reruns.
Posted by james bawden at 12:07 AM