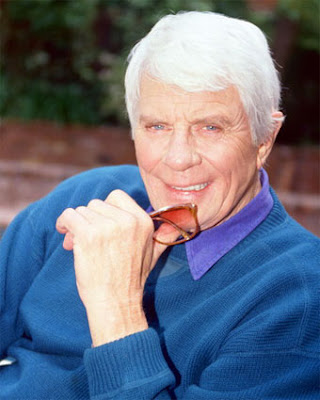 It was the summer of 1971 and I was in L.A. for my first full season of new TV interviews. A delightful CBS publicist, Betty Lamb, tlooked at this shy 24-year-old TV critic from The Hamilton Spectator and said "I think we'll start you with two gentlemen of the business."
So on my first TV tour I spent the first day interviewing old buddies Mike Connors and in the afternoon Peter Graves on the set of Mission: Impossible.
Both were delightful, unassuming gentlemen, real TV stars and proud of it but never wanting to step oputsode theior comfort zones.
Peter Graves who just died at 83 was one of the nicest TV stars I ever met.
He'd started out in small movie roles in Stalag 17 and Night Of The Hunter. Then came a string of wonderfully bad sci fi thrillers, one of which Killers From Space, was directed by Billy Wilder's brother W. Lee Wilder. And there was one from the master, Roger Corman.
True TV stardom came with the kids series Fury co-starring Bobby Diamond which ran on NBC 1955 through 1961.
Then came Graves' biggest challenge-- Mission:Impossible which ran on CBS from 1966 through 1973. A sequel series shot in Australia ran on ABC from 1988 through 1990.
The show shot on the Paramount backlot and I arrived after lunch. Graves could have waved me off but he wasn't at all like that. I remember they were shooting a bit where they had to open a mummy's tomb and when they first tried during rehearsal who should walk out but Ann B. Davis.
That's because The Brady Bunch shot right next door. Davis got her laugh and left and we went back to talking. We talked so long Graves was late for the next set up.
After Mission: Impossible wascancelled Graves spoofed his own image in the comedy smash Airplane. Then he immediately went to work on The Winds Of War playing one of his most serious roles.
Later still he supplied the voice on many episodes of the Biography series.
I still remember our encounter because Graves, austere but throughly professional, proved to be one of the few TV actors who lived up to his billing.
Posted by james bawden at 11:51 PM