The World Will No Longer Turn 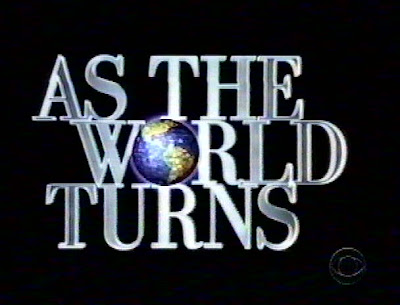 Maestro, a little organ music if you please.
It is with deep personal sadness I have to announce the imminent cancellation of CBS's venerable (54-years old) afternoon soap opera As The World Turns.
The last episode will run on September 7, 2010.
Me and The World we go way back. I was a sick, little boy (the measles) when ATWT premiered live on CBS on April 2 1956 in blazing black and white.
Then there was the time when I toiled for The Hamilton Spectator and got to interview one of the first actors on air and somebody still continuing, that most excellent of ATWT stars Don Hastings who played Bob Hughes.
Hastings holds the record for playing a character the longest on TV: a mere 48 years.
Helen Wagner who played his mom Nancy Hughes McClosky was the one series original still with the show but she wasn't there the day I ventured on set because of a long standing contract dispute. It wasn't settled until years later to permit her return.
And, yes , it was Hastings and Wagner who were interrupted that fateful day in 1963 as Walter Cronkite burst on and announced President Kennedy had been shot dead in Dallas.
ATWT was TV's most watched afternoon soap from 1958 through 1978. The show did not switch to color until 1967 and became an hourlong soap in 1975.
AS of Dec. 8 the count was an amazing 13,661 episodes. But who's counting.
Its demise marks the end of Procter and Gamble soap operas--originally these dramas ran live on radio and were owned by the soap companies.
The Spec once sent me off to New York city --it was around 1977--for an amazing week of going from TV soap set to soap set.
I interviewed the Canadian actress Tudi Wiggins who was co-starring at the time in the early bird soap opera Love Of Life.
She told me to whisper because the actor playing her son was sleeping on the couch in the living room set. He had to fly back and forth from Boston every day to make the show and the Katharine Hepburn play he was in at the same time. It was Christopher Reeve.
Love Of Life ran at 11:30 every weekday morning and I sat in on a live broadcast --yes, it true --a little man dressed in black stepped forth to the organ and began playing the theme music.
There was no canned music on any of these sets.
A visit to Brooklyn and a day on the set of Another World was a great experience. Stars on tap that day included Eric Roberts (Julia's big bro) and Christina Pickles and Gail Brown (Karen Black was her sis).
But the highlight was a visit to the penthouse suite of soap maven Agnes Nixon who had Another World an One Life To live running but whose first job was as a writer on As The World Turns.
It was the first half hour soap, a daring innovation in its day and the creator was the legendary Irna Phillips who also created The Guilding Light (cancelled three months ago) and Love Is A Many Splendored Thing.
Phillips set her saga in a fictional American Midwest city peopled by an all white cast. Original mom Wagner stayed home and seemed to be always baking. She once remembered her horror during a live broadcast when the beeper on the stove wouldn't shut off.
On the ATWT set during my last day in New York I met the CBS head of soaps, Darryl Hickman and such ATWT luminaries as Eileen Fulton and Chris Hughes. They traded jokes about the bloopers that happened on air during the days of live telecasts. At the time ratings were running sky high and continued for the next 25 years.
Stars who got their first breaks on the show include Meg Ryan, Courtney Cox, Parker Posey, Julianne Moore and Lea Salonga.
So what went wrong?
In recent years ratings plummeted and running original scripted dramas proved too costly for the Big Three network which can substitute a cheaply made talk thing like The View or a game show fin which five episodes are taped in one day.
Mothers never worked back in the Sixties --that was a real social stigma. And soaps flourished in a three network TV universe.
Soaps got too racy for many of its staid supporters. ATWT's gay themed love affair didn't attract the numbers as intended.
Soaps are still there but in other forms. Night soaps still work --look at Brothers And Sisters, Grey's Anatomy and Private Practice.
And what about the Tiger Woods saga with his multiple mistresses which the TV tabs are currently playing for all its worth. That sad saga is a true life soap all by itself.
ATWT ends in September and there are plans to try to sell it in syndication. Reruns will be on the U.S. soap channel which we don't get up here.
Next to go is ABC's fragile One Life To Live. Or so I'm told.
That means only five soap operas could be around by the end of the current season. The end of an era? Yeah. But the live organ accompaniment ended decades ago.
Posted by james bawden at 8:04 PM