And Then There's Maude 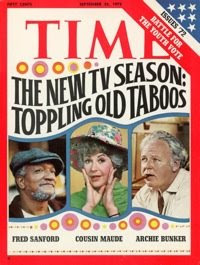 A teenager up the street had told me of her high school project to view and criticize a classic TV sitcom from the 1960s or 1970s.
And of course she turned to yours truly, a TV critic who had lived through those decades and written about many of the most popular TV comedies.
I suggested Maude and gave her the first season DVD which I'd only just finished watching.
The Norman Lear comedy starred Bea Arthur and ran on CBS from 1972 to 1978 and might have gone on had Arthur not tired of the format and quit.
Here's where I get to say I was on the set before it even debuted --I was in L.A. for the annual TV critics' tour and got to meet and interview Bill Macy in the CBS commissary.
So I was floored when the student finally returned the DVD but allowed that she found some lines funny, admired Arthur's biting delivery but really didn't understand half of what was going on.
Then I realized Maude was a long, long time ago in TV history.
Richard Nixon was the U.S. President, three networks (CBS, NBC, ABC) dominated the TV schedules and took over 85 per cent of the ratings, and sitcoms flourished.'
Today only a handful of sitcoms exist. And I had to wonder if Maude might not make it in today's congested TV panorama.'
Maude, you see, was really about something.
It was a hearty if comical defense of liberalism as practiced by 47-year-old suburban housewife Maude Findlay (Arthur).
Relevance? In a gripping two-parter Maude had to contemplate an unwanted pregnancy at her stage of life.
Worse than that she had her mind set on an abortion. Remember this is a comedy we're talking about and one on CBS which starred such other sitcom heroines as Lucy Ball, Doris Day and Mary Tyler Moore.
Well, Maude, had her abortion after much hilarious anguish although this was never mentioned again.
Another thing --Maude totted a purse filled with sedatives and tranquilizers and even gave them out to husband Walter (Macy) and grown daughter Carol (Adrienne Barbeau).
Next door lived bachelor physician Arthur Harmon (Conrad Bain) who after an all night bender dropped in for a breakfast of vodka and orange juice before heading off to see his patients at the hospital.
The series really took off in the fourth episode with the arrival of black housekeeper Florida (Esther Rolle) who defied every liberal cliche that Maude had about black people.
In one episode Maude holds a fund raiser for a black activist and passes Florida off as a middle class black named Mrs. Dubonnet just to racially balance the event.
There are nasty but true jokes about Nixonism, Arthur's rants about free love and even a sit in at the police station when Maude hears a local boy is going to jail for possession of marijuana.
In short Maude is more with it than any TV series I can think of today where controversial issues are simply not discussed.
No wonder the student couldn't understand it --imagine people openly discussing the issues of the day in a witty, comical style.
In subsequent seasons Maude would have a face lift and confront menopause and Arthur would battle alcoholism all to the sound of hearty audience laughter and applause.
In 1978 Lear decided to have Maude run for Congress and depart for Washington. But Arthur quit and the story was retooled as the sitcom Hangin In and lasted four weeks in the summer of 1979.
And now that I think of it I should have given the student my DVD of the first year of The Doris Day Show. She'd better understand that one, I'm sure of it.
Posted by james bawden at 11:26 PM