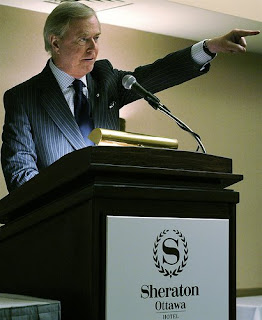 Look what the recession is doing to Canadian TV!
First it's Mike Duffy who leaves his long running CTV series and opts for the Canadian Senate. TV viewing without the Duffster just isn't the same.
And CFTO's perennial weathercaster Dave Devall has decamped after 48 years which is said to be a record. Think I'll have to chew on that for a bit considering Percy Saltzman and Bill Lawrence hung in there for almost as long.
Once for a profile in the Toronto Star I coaxed Devall, Saltzman and Lawrence into a photo studio for a group shot and it was the first time Devall and Lawrence, long time rivals had ever met each other.
Now Newsworld's Don Newman , 68, has taken the voluntary retirement package and is leaving at the end of June.
Newman was a marvel on his weekday NW show. He covered an incredible amount of topics every day and was proof positive Canadian politics was never dull.
It seems he's been around forever and a day. He jump started CTV's Washington bureau in 1972 to provide ace coverage of the Watergate scandal. Then he hopped over to CBC news in 1976 and just stayed there becoming part of the Ottawa bureau in 1981.
I once interviewed him for a Toronto Star profile which The Star spiked because editors found it was too complimentary. Dig up some dirt! I was told. But I couldn't find any rival or any politician who had other but kind words for this consistently under rated TV journalist.
I admired Newman then and still do. Compare his daily show with some of American cable TV's Washington-based shows and it's the difference between informed reporting and screeching TV tabloid news.
At least  CTV was able to rope in the respected Tom Clark as the Duffster's replacement. With so much attrition at CBC News is there anyone on staff to inherit Newman's mantle? We'll just have to wait and see.
Posted by james bawden at 9:57 PM